Level 5 leaders draw new strategies out of their teams, but this is facilitation, a management technique. Leadership directly influences people to think or act differently, especially when shown by example or bottom-up.

Jim Collins didn’t explain level 5 leadership in Good to Great as clearly as he should have done and only a careful examination of his thinking reveals its true essence.

Level 4 leaders develop and promote their own visions or strategies and then get people to implement them (first what, then who), while level 5 leaders draw strategies out of their teams by asking probing questions (first who, then what).

Early in Good to Great, Collins focuses on the level 5 leader’s humility and strength of will, the combination of modesty and the determination to succeed. When you ask people to describe the essence of level 5 leadership, this is what they say.

But a little later in the book, he quotes one of his level 5 CEOs as saying that he doesn’t know where to take his company but if “I start with the right people, ask them the right questions, and engage them in vigorous debate, we will find a way to make this company great.”

Two of the tips that Collins offers on “basic practices” for level 5 leaders are:

He quotes one of his level 5 CEOs as beginning, “not with answers, but with questions,” adding that he “put more questions to his board members than they put to him.” He describes another level 5 CEO as being a “mediator” in vigorous debates in which the senior team decided upon a new strategy together.

So, the distinguishing feature of level 5 leaders is the use of questions to draw ideas for new strategies out of the senior team and then to act as a mediator or facilitator to help the team reach a sound conclusion.

Level 4 leaders do their own thinking; they think they have the answers and they just need to motivate people to implement the strategies they have devised on their own. Level 4 leaders “tell and sell” while level 5 leaders “ask” and facilitate agreement.

Collins confuses the issue by positioning “first who, then what” in terms of getting the right people on the bus, it being hard to motivate the wrong people and because the right people will know better what to do.

But the critical point of “first who, then what” is not just about hiring quality people but using them to help develop new strategies. Collins describes level 4 leaders as promoting their own visions, which is surely the point of “first what, then who.” Level 4 leaders decide strategy (what) and then get people (who) to implement it.

In describing the key features of level 5 leaders, he doesn’t mention the core skill of asking probing questions, which only emerges later in the details, hence why most of his readers seem to have overlooked it. But it must be critical because it is the key differentiator between level 4 and 5.

When we see level 5 leaders as question askers rather than as level 4 solution generators or answer givers, we understand the real reason why level 5 leaders have humility: because they recognize that the world is too complex for any one person to have all the answers. Hence the best way to get good answers is to ask probing questions of the best people you can find.

CEOs who take businesses from “good to great” are naturally seen as leaders. Starting with this assumption, we want to know how they did it. Their actions then become the basis for our definition of leadership.

That is, it is simply assumed that successful CEOs must be leaders, so the only question is how such leaders behave in order to succeed. The option, never considered, is that much of what such CEOs do might be seen as effective management.

But why does it matter? Well, if we want one model of leadership, then it has to account for inconvenient instances like leading by example, where no questions are used to draw anything out of anyone. Leading by example works through direct influence.

Green leadership is another odd case that doesn’t fit the level 5 model. Green leaders challenge the status quo by demanding an end to our energy wasting ways. When they succeed, it is by directly influencing us to think and act differently. This is what Martin Luther King, Gandhi and Nelson Mandela did as well. They challenged the status quo and had a direct influence on the attitudes of millions of people. Similarly, when front-line employees convince management to adopt new products or processes, this is bottom-up leadership. It too is a direct influence process.

Collins states that level 5 leaders face reality. But we are avoiding the reality that CEOs can’t provide all the leadership a complex business needs. If they really had humility, they would stop calling themselves leaders. They would admit that behaving as a facilitator is not leadership. A facilitator is a facilitator, not a leader. Instead of facing that reality, we redefine leadership as a facilitative process in order to preserve the status quo that effective CEOs must be leaders. 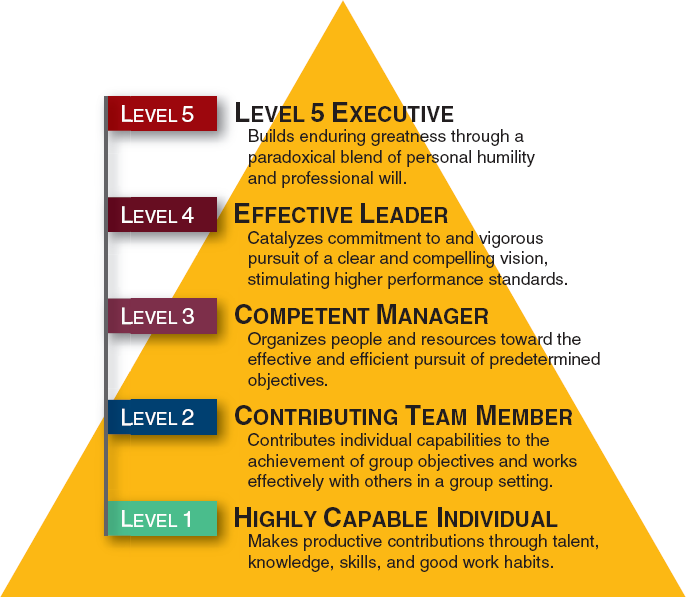 Unfortunately we have a very negative image of management. But it can be upgraded and redefined as the process of achieving goals in a way that makes best use of all resources. This definition of management carries no implication of being controlling, bureaucratic or preserving the status quo.

This definition accounts for self-management. Whenever we set priorities or rearrange our schedules in order to get more done, we are managing ourselves. With this definition in mind, the best way to manage intelligent people, to get the best out of them, is to use good questions to stimulate them to think, to draw solutions out of them. Engaging questions are thus an excellent management technique.

Conclusion
There is no question that CEOs should behave as Collins suggests. We need more managers with the self-awareness and humility to recognize that they don’t have all the answers so that they do more asking than telling. The mistake is to call this way of behaving leadership.

This is important because businesses that need faster innovation need more bottom-up leadership from all employees. But such leadership is a direct influence process, like all leadership. Leaders challenge the status quo and promote new directions. When CEOs advocate a better way convincingly, they too show leadership. When they draw solutions out of others, however, they are wearing a managerial hat. Thus there may be level 5 management, but no level 5 leadership.

Building Your Business to be the Best